PC Power Control with a Raspberry Pi and Maas

I recently decided to setup a small cluster of computers at home to be managed by Juju and MAAS. The computers are in the attic which meant that finger based power management was going to quickly lose its appeal. Many of my friends and colleagues have enviable home computer setups, with power control being done elegantly by iLO/LOM/Intel AMT or some such. None of my old tin boasted anything as grand as that. I could have used wake-on-lan as both MAAS and my old machines support it but it doesn't provide a reliable way to power machines off (they don't always have shell access) or to check their current power state (they may not be on the network). What I'd have loved to do was build a rebot but that would be costly and I'd have to design a bespoke rig for each piece of hardware since my old kit is not in neat NUC form. In the end I decided to get a Raspberry Pi Model B to do the job. Unfortunately, I know next to nothing about electronics and do not own a soldering iron so my solution had to be solder free.

I found this blog (minus tampering with the power feed between power supply and mother board) and this blog (but extended to control multiple machines) both very helpful and they inspired the final design.

ATX motherboards expose pins that a computer case uses to wire in the reset button, power button and power leds. I removed the connections to the case and instead wired the power and reset pins to relays controlled by the Pi and wired the pins controlling the power led into one of the PiFaces' Input ports.

The prototype had jumpers cabled directly from the pins to the Pi but I wanted to be able to unplug the computers from the Pi and have them some distance apart so I used Ethernet cables to connect the Pi to the computers pins. Essentially the solution looks like this...

I used a Raspberry Pi Model B with a Piface hat. I had the Piface in a drawer so I used that for the prototype as it comes with two relays.

Setting up the Relays

The relays on the Piface worked but I needed two relays per PC. To get more relays I bought an Andoer 5V Active Low 8 Channel Road Relay Module Control Board. Oh, and by the way, one RJ45 jack cost twice as much as the 8 relay Arduino board.

Connecting the relay board to the Pi was straight forward. I attached the ground pin to the Raspberry Pi ground and the 7 remaining pins to the 7 PiFace output pins. The relay also came with a jumper which I put across the VCC-JD and VCC pins for reasons.

At the PC End

The PC part of the puzzle was simple. I used jumper cables with a female end and used them to connect the motherboard pins to a depressingly expensive RJ45 jack. The connections on the RJ45 jack are numbered, below is how I wired them to the motherboard.

The ethernet cable from the PC was again terminated with a RJ45 jack whose connections were wired into the Pi as below: 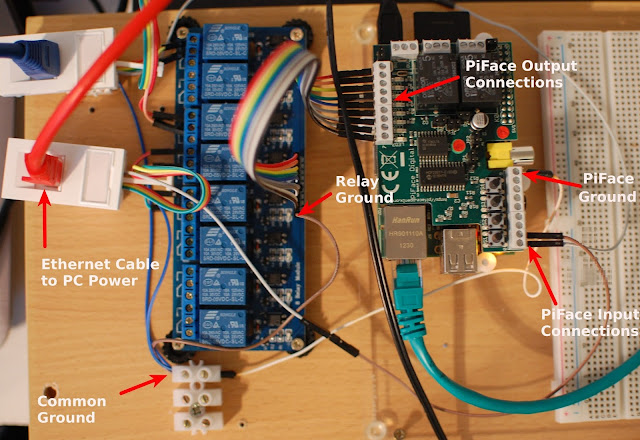 Once everything was connected, MAAS needs a way to remotely control the relays and to check the state of the input pins. I began by writing a Python Library and then adding a Rest Interface that MAAS could call. Finally I installed gunicorn to run the server.

MAAS knows about a number of different power management interfaces and it was fairly straight forward to plug a new one in, although because it involves editing files managed by the MAAS package these changes will need reapplying after a package update. I believe that making power types more pluggable in MASS is in the pipeline. 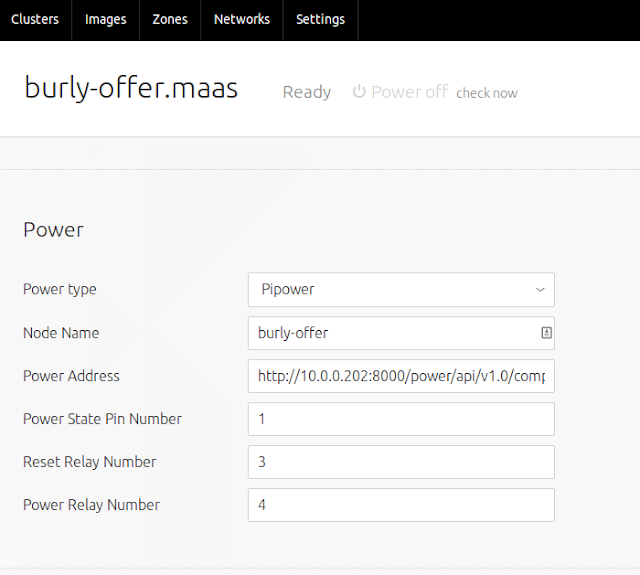 There are eight relays available and each computer to be managed uses two of them so the system will support four machines. However the reset relay is not strictly needed as MAAS never uses it which means you could support eight machines.

I can now have MAAS provision the machines without me being physically present. So, for example, I can use Juju to fire up a fully functioning Openstack cloud with two commands.


In the background Juju will request as many physical machines as it needs from MAAS. MAAS with bring those machines online, install Ubuntu and hand them back to Juju. Juju then uses the Openstack charms to install and configure the Openstack services, all while I'm downstairs deciding which biscuit to have with my cup of tea. Whenever I'm finished I can tear down the environment.


MAAS will power the machines off and they'll be put back in the pool ready for the next deployment.

NOTE: I adapted an existing bundle from the Juju charm store  to fit Openstack on my diminutive cluster. The bunde is here